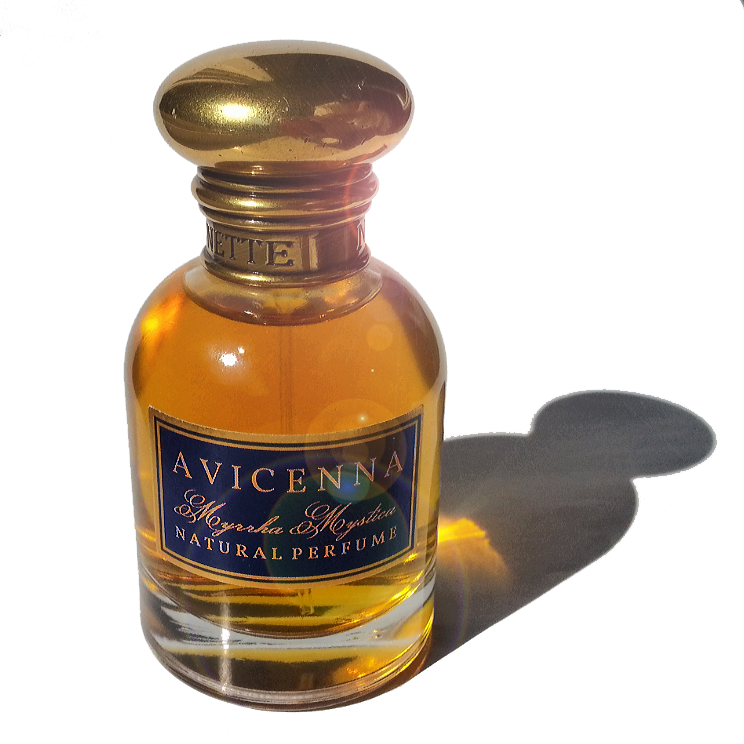 The spicy oriental rose theme of Avicenna, anointed by the sparkling glow of finest Somalian Myrrh.

Additional information: This perfume ranks in the Top Ten Unisex Perfumes (out of currently listed over 100.000!!!) on Parfumo since 2016 and is featured with a four star review and in the Top Ten List of "Perfumes The Guide 2018" by Luca Turin and Tania Sanchez.

We find ourselves in that chancy segment of wintry days in many parts of the world: post-holidays, the encroaching of very real winter, a portion of the season when we clutch at whatever is at hand in order to illuminate our days and nights. Many struggle to make sense of demons (both internal and external) as others, from my life’s experience and documentation – yield themselves up to despair. Is there an olfactory tonic with which to dispel gloom? I’m here to avow that Annette Neuffer Myhrra Mystica is one, a long-lasting, natural perfume and a profound delight. Meet Annette Neuffer, my dear friend from Bavaria I’ve known for years, and it’s my pleasure to introduce you. To call Annette a Polymath is to underestimate her: everything she touches turns to gold, whether one chooses to regard her considerable musicianship (jazz singer and trumpeter, teacher, arranger, concert artist), perfumery, wit, parenting, wide knowledge base, multilingual abilities. She possesses a seductive speaking and singing voice, an infectious laugh, big brains and abundant humor combined with refined aesthetics and common sense.

Over the years many Europeans have enjoyed her compositions and Annettte's been kind enough to share hers with me. Annette Neuffer Avicenna Myrrha Mystica, composed in 2016 is a fine starting point, a variation on an aromatic theme initiated in 2007, Annette’s original Avicenna – described by the perfumer as “a spicy oriental rose theme, named after the Persian scientist and philosopher Avicenna from Isfahan, who invented the distillation of rose oil in the 10th century. All its bona fide bone structure remains, adorned with an abundance of exquisitely arid expressive myrrh counterbalancing its spicy floral generosity.

“From the depth of the black earth up to Saturn's apogee,

All the problems of the universe have been solved by me.

I have escaped from the coils of snares and deceits;

I have unraveled all knots except the knot of Death.” ~ Avicenna (Ibn Sīnā)

One may well inquire, “how many spicy orientals do we need?” In these days where beloved perfumes are anemically reincarnated as a pale semblance of themselves, if at all (no, I’m not going to name them; you know who they are) –Annette Neuffer Avicenna Myrrha Mystica is a warming welcome antidote.

Spices send you over the moon! Nose-tickling pungent black pepper, bronzed saffron, fiery sweet cinnamon and ginger. However did she pair mouthwatering cardamom with sumptuous honey tangerine and zestier citruses? – Annette Neuffer Avicenna Myrrha Mystica  is a vixen. Too much is Never Enough: her bevy of roses is impeccable and inebriating for a rose-mad soul like me – followed by swoony orange blossoms, feral jasmine and voluptuous tuberose. Add a soupçon of spellbinding broom (aka genêt): heavenly sweet, hay-like and herbal for good measure.

You think we’re done? Hardly. We need a bed, for heaven’s sake: a cradle of divinity with carnal purrings provided by beeswax and labdanum. Sweet myrrh (aka opoponax) nestles up to Bourbon vanilla and Indian sandalwood, The Golden Mean. Would a little benzoin hurt? (Has it ever?) Lest we cloy, lemony-peppery elemi and desperately dry Somalian myrrh, olibanum present themselves, revered by mystics since time immemorial. They furnish certain sanctity, feel like a fragrant benediction.

Avicenna Myrrha Mystica is insanely comforting, delicious. It swirls around one like a perfumed djinn, enchanting those who wander into its orbit. It may seem hyperbolic of me, but it’s the aromatic truth; when I apply it I feel cosseted and alluring, and those I embrace are smitten with this perfume.

If you adore Caron’s Parfum Sacré as it once was, then I’ve no doubts that this will captivate you.